The missing helmet! Natalie found it!

Over a year ago I realized that my Bell Helmet was missing. Somewhere on the move from Colorado to California it went off into its own world.

I was sure I had it with me when I came in March 2010, and must have left it in a hotel while I was shifting around hotels for a few weeks while looking for a place to live. I went through box after box after box when we moved all our stuff from Colorado to CA in April, but no matter where I dug I couldn’t find it.

Then last month we moved again, this time only 20 miles or so away, but I figured I would find the helmet if it were still around during that move. I was wrong. I found nothing.

Until today, Natalie was going through boxes of pictures with her mother (visiting for the weekend) and in one of the boxes labeled Picture Frames, she found the helmet! 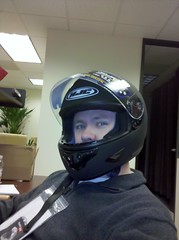 Earlier this year I purchased a new helmet (pictured) getting ready for the 2011 autocross season, while I like the helmet, it wasn’t my Bell, which I always hoped would return.

I’ll have to take a picture of the Bell later this weekend, I can’t find one digging through old photos, but I did come across some photos from the day I picked up my 2003 350z. 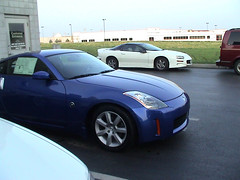 « Autocrossing this sunday in Marina, CA Back in the saddle again »
comments powered by Disqus