No, the suspension didn’t break, but man did murphy show up in full force today.

I’ll do a full write up with photos and what to do, where, etc, later this week, but for now let’s talk about what went wrong!

The rear of the car was great, only a couple of minor issues. The first issue was that one of the rear shocks didn’t have the nut that came with the original Konis so that the upper mount could attach. Not a huge deal as I had a spare nut to use. Then when I went to put it on the car I found out that I was missing two other nuts, for the lower mount/bolt. I didn’t have anything for those so I had to run to Ace Hardware to pick something up. I also got some anti-seize because I remember how much of a pain the lower bolt was on my old 350z, so much that I left the shocks on it when I sold it because I couldn’t get them off.

Not a huge deal like I said, I got the rear squared away. 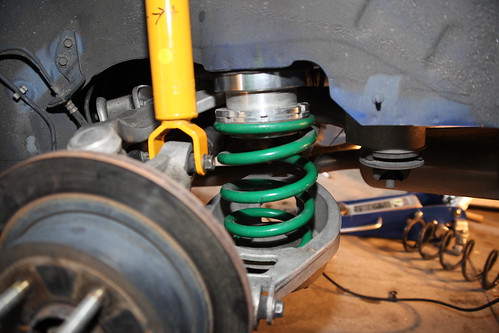 The fronts however were a different story. Everything came off easily, even the oem control arms. I quickly realized that I wasn’t going to be able to get the bushings out though, I was going to need to have them pressed out. Not a huge deal, I could put the other control arms on, the SPL arms that I got with all the suspension. I wasn’t planning on using the SPL arms, because they aren’t legal for the class I am running in Autocross, but I could put them on for a few days while I finished up the OEM arms and custom bushings.

I did try to burn the bushings out, and while I caused a mess and got some nice burning rubber fumes floating around the garage, I didn’t get very far. Here’s a photo of the before and after 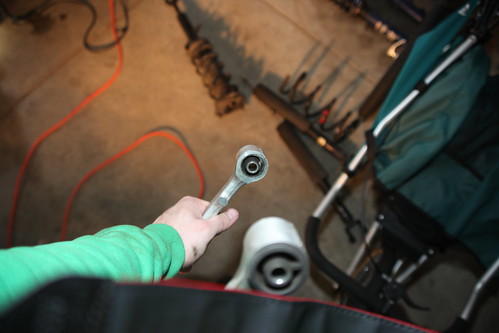 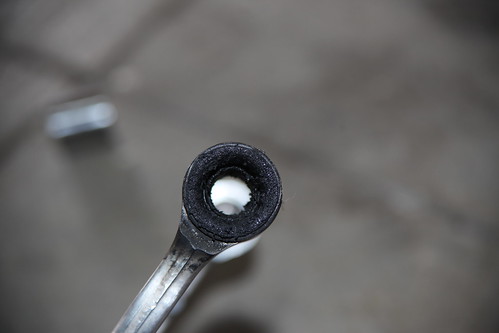 So I started to put things together, the front coilovers back on, and I started to bolt them in place. Problem. The TrueChoice Koni coilovers unfortunately don’t use the same bolt as the stock struts did. And guess what? I didn’t have anything that would work. I ended up driving around town for 2 hours this afternoon trying to find a bolt that would work. I found something, but it was class 8.8, which from my reading is equivalent to grade 5. Most likely not strong enough, but I went ahead and tried to use them anyways.

Then, next thing. I put this bolt in place, and then started to attach the upper control arm back in place. That’s when I ran into the next problem. The SPL arm’s ball joint uses a different size bolt than the OEM ball joints, so here I am again, without the parts needed to put the car back together. I ended up getting the car rollable so I could get it entirely into the garage, then put it back up on jack stands in the front, then removed the other oem control arm. I’m going to have Natalie take me to work tomorrow, and hopefully I can get the control arm bushings pressed out so that I can get the car back together tomorrow or Tuesday evening. I also need to order new bolts for the front struts. (m12 1.75 70mm should work)

I have a lot of photos from today posted on the Suspension Flickr Set.

And of course, here’s the time lapse!

Time lapse of the suspension work