I was pretty down today. Going into the first set of runs I had a headache that didn’t seem to want to go away and I wasn’t happy with my performance the day before. I was actually sitting there thinking, why do I do this? I really was thinking, I love seeing friends and talking to everyone, but I was pretty down on the racing part of things.

While I was announcing first heat a number of cars were DNF’ng corner 3, all the MOD cars dnf’d their first run. I thought, what is wrong with these people, why are they dnf’ng up there? Well, on my first run I found out, as I did the same damn thing. I was flying around the top of the course, looking ahead (or so I though) and all of a sudden I realized I wasn’t anywhere close to making it where I needed to be, I slammed on the brakes then decided there was no way I was going to make it so I hit the gas and drove on.

My second run started off okay, but coming in to the end I clipped a cone, I knew it, wasn’t one I should of hit, but did. So I was sitting in 8th or 9th as of that run, where I started the day in 7th.

My 3rd run I wasn’t really happy going into, I was sitting in 3rd place in ZSP (our little Z car competition with 4 drivers). I went out and did as well as I could. I put up the lowest Z time for the day and moved into first in ZSP and 6th in BSP. Had I not had issues yesterday I truly believe I could have taken 5th for the weekend (1 out of trophies) but I still would have been 4 or 5 seconds out of first.

I’ll have videos up in the next couple of days, I have some photos uploading at the moment, when they are all complete they will be found at 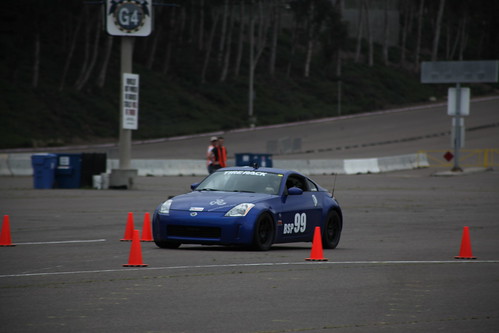