So here we are, one day after the tour and I have all 6 of my runs squared away on video. Now to get them blogged about, in order of course.

I started off with a very slick feeling car, cold tires. Over all the run was okay, but I felt like I was braking too much (only slight taps) and I should have been a lot faster. I was all over the rev limiter multiple times, I think I briefly shifted to third, but should have done it earlier and for far longer. 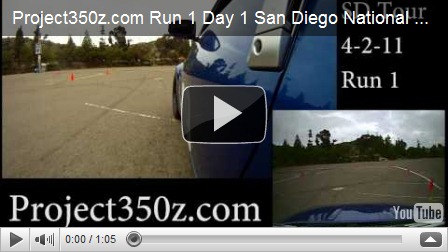 On my second run on Saturday I went out with the idea that I wasn’t going to hit the rev limiter, I was going to shift to third at the top of the hill and run down the hill in third. This worked out well, until right before the final slalom when I was carrying too much speed and the rear of the car came out from under me. I came to a sliding stop and continued on the course to a time of 60.5 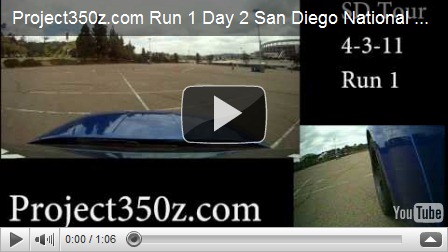 My third and final run, I started off and blew the corner just after the first slalom, this got me stirred up so I decided to really try and push it on this run. Well I pushed it, pushed it hard enough to hit two cones in the middle of the very last slalom. I knew I hit one, didn’t realize the second one. Would have been a decent time (compared to my other times) had I not hit those pesky cones. 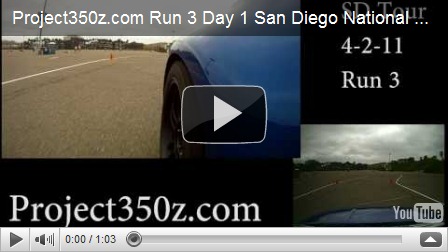 So I was fortunate enough to announce the San Diego Tour, I was announcing first heat. On Sunday morning a number of people were DNF’ing at corner 3 on their runs. I thought, how the heck are these people dnf’ng. At one point three mod cars (the only three in the heat) DNF’d on 3 consecutive runs. Well, on my first run I figured it out. At the top of the hill right before the sharp right hand turn, there was an element you had to setup to the left of. I realized this right when I was passing by on the right. I ended up slamming the brakes but had no way to get over, so I floored it and kept going. I managed a decent time, 51 something I believe, but it really didn’t matter with the DNF

On run 2 I went out and tried to throw down a good time, I was pretty frustrated with myself that I had DNF’d the first run. Well right before the finish I managed to clip a cone, throwing this run out the window as well. After this run I was sitting in 8th or 9th in BSP.

Finally, a run I could be happy with, the first one all weekend. This run ended up putting me into 6th place in BSP and 1st in our own little ZSP class we had going internally in BSP.