So I ran into a few issues today with my GoPro HD. I was working on the car, and was going to do another time lapse, even picked up a second battery last night so that I was sure I would get as much as possible.

Then my GoPro HD crapped out on me. It turns out there’s a Time Lapse bug that when it takes the 9999 photo (in the camera’s life) it freaks out and starts creating tons of folders, and stops taking photos. So I tried updating the firmware to fix the bug, but somehow managed to totally hose the GoPro HD all together. Now it won’t turn on.

Here’s the video I did get today. 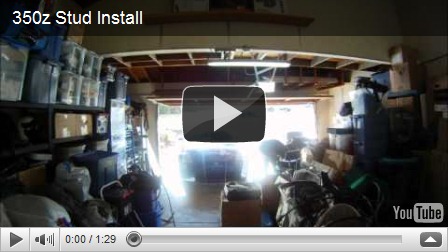 I did get a lot done on the car today. I replaced all the OEM studs with longer ARP studs, as well as I managed to get both the front and rear Hotchkis sway bars installed.

It looks like I won’t have any HD Video of tomorrows Autocross, but I will take my older GoPro (non-hd) to see if I can get some, along with my ChaseCam. The car is loaded up and ready to go, tires are stuffed inside!