Mounting a video camera behind your car

Today was the first event in the San Francisco Region’s slush series. I decided to head out and try to dust some of the rust off, and last night decided to build a camera mount for the car. After seeing the GoPro HD Hero2 launch video, I decided it was time to try to start getting more interesting video.

Earlier this week I attempted to do something interesting with video on my bicycle for www.bicycletips.com but the video turned out pretty bad.

For the 350z I wanted to try to get the camera up and behind the car. Not just on top of the car, but a couple feet back and above the car. So I got the building, really I didn’t build much, just assembled some parts that I had, and that I picked up from the local Ace Hardware store here in Half Moon Bay.

This is the end result 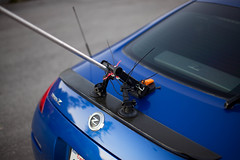 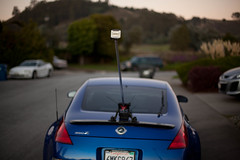 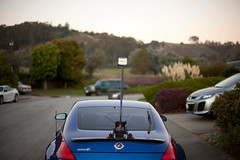 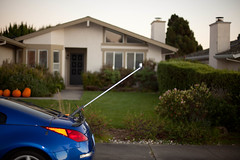 I won’t bother posting all the parts of what this contains, not yet, as it is just V1, and you will see from the video below that it actually doesn’t work that well.

That is video of my 4th run today. I had cone issues all day long, and the fourth run was no exception, but that’s not the real focus of this post, the video.

The video, blah, it really didn’t turn out well. The camera has two major flaws. One the way I mounted it into the extension wasn’t secure enough, so it had slight movement, which I think is the majority of the noise you hear, though some of that could actually be from the safety strap that I had all this tied to the car with.

The other flaw was the amount of movement on the camera/poll itself. I don’t think there’s a good way to get rid of that without doing some sort of guide cable setup, which I hope to try out in the next couple of weeks.

I do like the angle that the view that the video shows, makes for an interesting angle for sure.