So I spent the afternoon yesterday trying to repair a leak in the Injen Super SES Exhaust system that was on the 350z when I purchased the car back in January. Sometime in March the exhaust started leaking and it has slowly gotten worse. Normally I would of just scrapped it and put something else on, but with all the life changes (new job, moved to California, trying to sell the house in Colorado, prepping for our first child) we’ve been going through the budget hasn’t allowed for that at this point.

When I was down at Z Car Garage with the car on the lift a few months ago we figured out where the leak was, at the seam of the resonator/muffler in the middle pipe of the exhaust system on the driver’s side. Yesterday I finally took the time to get the car into the garage and up on jack stands. I pulled the middle exhaust pipe out off the driver’s side and it was very apparent where the leak was occurring, on the exit side of the resonator, there was pretty much a ring all the way around the pipe and the muffler where it was separated, the entrance side though looked fine.

So I went to Autozone yesterday to get some exhaust sealer, hoping that I would be able to patch up the leak, and at least provide a temporary fix, to get me through the next few months so I could do something different this winter when I start to prep the car for the 2011 SCCA Autocross season.

With the pipe out of the car I took a Dremel tool to the edges around the crack to try to prep the surface a bit. After that I cleaned up the surface a bit and then applied the sealant to the surface. The directions said to leave the sealant for 4 hours, then heat the surface for 10 to 15 minutes. I went ahead and took this approach, using a heat gun to slowly warm the sealant up. This was the end result. 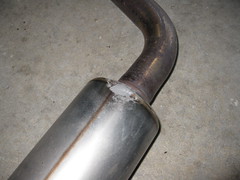 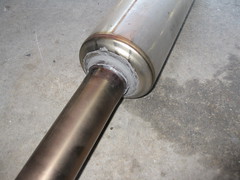 After work tonight I went to O’Reilly and Kragen Auto Parts to get two new gaskets for the pipe and put everything back in the car. I started the car up and all was well, no leak! I took the car down off the jack stands, we’ll see what the video looks like, but damn lucky I wasn’t under the car when two of the jack stands came down! I seem to have good luck with them….

I took the car for a drive and thought all was well, the exhaust sounded great and I didn’t hear any leaks. When I got home and pulled in the driveway however the leaks were back. I sure wish I hadn’t sold the welder before we left Colorado! I would try my hand at fixing this, though I doubt I’d do well with the stainless steel.

So here we are, back at square one. I’ve emailed Injen, I’m hoping they will come through with an option to possibly just purchase the two middle pipes at a reasonable cost. We’ll see how it goes. My next option is probably to look for a stock (OEM) exhaust on My350z.com from someone local, that may be my best option.

And of course, in honor of Project240z.com, the video is above, I put it together from the work yesterday (After working on cleaning up the garage to make room for the car first). I also created a video of tonight’s work while I installed the pipe back in.

« Nismo Cold Air Intake for a 350z Our first California Autocross, with video and photos »
comments powered by Disqus