Sunday I partook in the NorCalUFO autocross, their second event of the year, my first attending since the baby was born in October. I got to the event and heard that they had a course worker get hit at their last event, unfortunately he was hurt pretty bad and of course doesn’t have insurance, so they were taking donations. I assume that their insurance doesn’t cover the injuries? I believe (could be wrong) that SCCA events always have insurance that would cover someone who got injured, but perhaps I’m wrong. The odd thing is this is the SECOND course worker they’ve had hit in the past 6 or 9 months. Not exactly something that you want to hear when you show up. (Mental note, keep that in mind when signing up for worker positions)

WOOOOOOWHOOOO! Fun at an autocross again. It’s been a few events since I’ve really had fun at an autocross. This time around I was still on the crappy street tires, which actually I think are worse than before as the rears are getting pretty bald, it was wet, so that made things more interesting.

I started out the morning by driving down to Marina (about an hour and 40 minutes), stopping to get a bite to eat, and then to grab a gallon of gas when I got there. I got to the site around 7:30am and got registered for BSP, and signed up for the “course monitor” work assignment for the 4th run group.

I took 3 video cameras with me (4 if you count my DSLR), my GoProHD, my original GoPro and my ChaseCam. Unfortunately the original GoPro is such as POS that it failed to work for a single run… go figure. I love the GoProHD, but I tell you being an early adopter of GoPro (I got the first one in December 2007) was a mistake, their original cameras just flat out suck. If anyone from GoPro is reading this, I will gladly trade you guys my original one for another GoProHD, contact me!

My first run I went out with tire pressures around 48/46psi, it was like a drifter’s dream, wet surface, bald tires with high pressure, the rear end was moving around like a girl putting herself through college in east St. Louis. Here’s a video of the run, both from the top of the car, and inset with the passenger side view of the right front tire, watch all over the steering correction while the car dances. 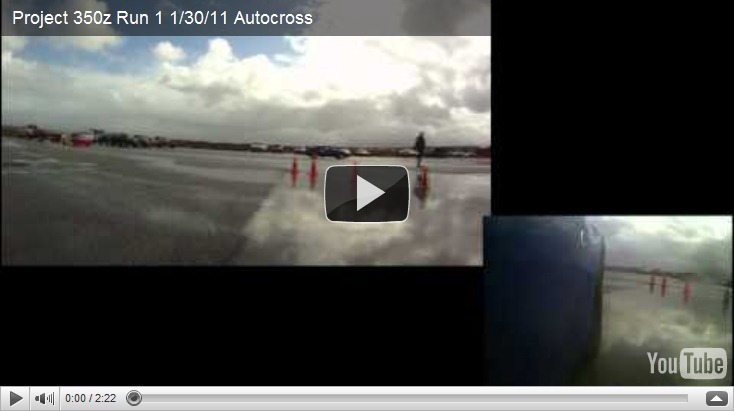 With all that moving around I was sure when I cross the finish lights I had taken out at least 4 cones, but the final results show only 1, but a nice and slow time of 53 seconds.

The second run was a little better than the first, improving on raw time, and clean. The third run however is another story, I was going okay until a couple of turns before the finish when the rear of the car decided to do the old Sauget shuffle and batted a few cones off course (video coming soon) My third run was the fastest up to that point, but I had 4 cones today based on the results. 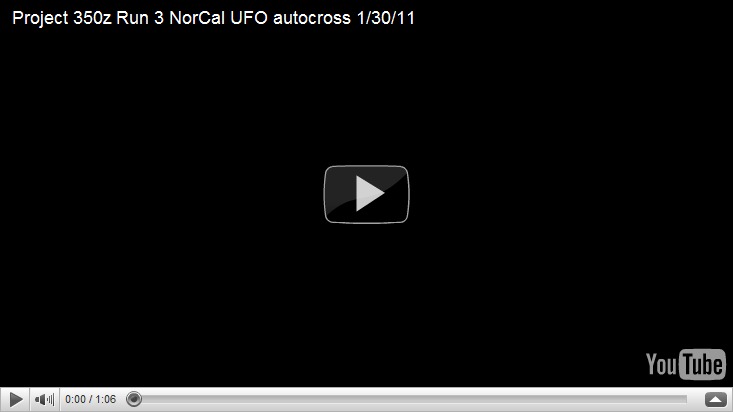 My 4th and final run was when the fun finally kicked in. The course was starting to dry out more and I took a serious drop in tire pressure, going down to 38/36. Talk about a big improvement, the tires were starting to squeal (I hate street tires) due to the drying surface. I got down to around a 48.9 on that run. Much improvement, not enough to put me into the lead in BSP but I was happy with a very under prepared car on super cheap street tires.

Here’s the video from Run 4. 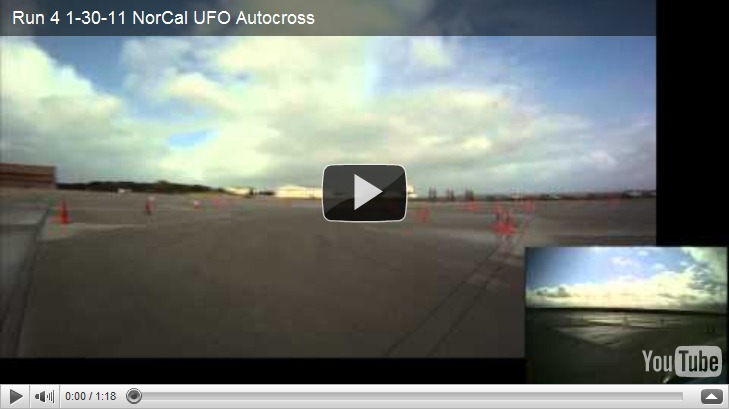 You can also check out some external videos of the 350z running, though you’ll have to dig through Will’s 20 minute video he posted to find them! (fast forward to around 4:46)

I’m already signed up for the SFRSCCA Divisional which is running the weekend of 2/19. I’m also planning on hitting the SCCA event the weekend before, hopefully both events I’ll have the car shod in some r-compound tires and some nice fatty wheels.

« How do you travel with your video equipment? 350z BSP Parts Configuration »
comments powered by Disqus