And so it begins, Project350z.com now has a project

So begins the latest project, Projectquattro.com has been disposed of, after the incident a few weeks ago, where it took out a light pole, it was time for the car to go. I ended up not getting it repaired, it was actually going to cost just less than we originally paid for it, so instead, we traded it in tonight! 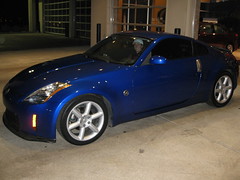 You might think, hey, wait a minute, isn’t that the same car you had back when? Well, not quite. My previous 350z was a 2003 Enthusiast. What’s the difference? Well between 2k3 and 2k4, not much, 2k4 I believe is less buggy, the only physical difference i know of is that the 2004 has pads next to your leg on the center console, and a power plug under the passenger side of the dashboard.

So what comes next? Well, more modifications to get the car ready for the STR Street Touring Roadster class in the SCCA. When I’ll get to all those I’m not sure. I’m going to try to go over the car thoroughly tomorrow in the garage, see if there are any other custom parts I don’t know about. At some point in the coming weeks I’ll come up with a list of things I need to get done to the car before the full blown autocross season starts up.

Also tomorrow I’ve got a guy coming to take a look at the Project240z. I would like to keep that, but I know I shouldn’t, I won’t ever get it finished, especially now that I have this 350z!

On January 30th I’m going to take the Project350z out to its first Autocross.