Always good after a wash and a wax

It has been quite a while, over a year, since I really spent some time washing a waxing a vehicle. My how time has flown, last year we spent time prepping for, and moving to Colorado, during that time I was without a “fun” car, having sold the Corvette back in October 2008.

Today, for the first time since likely 1995 I spent time washing and waxing a car in California. And the weather was beautiful! I spent the yesterday evening and today up at a friend’s house in Fairfield, the town I went to high school in. We had dinner with friends from HS last night, and then this morning I spent the day cleaning up my the 350z for the first time since picking it up, and boy did it need it, especially after the 1200 mile road trip (on the back of an open trailer last week from Colorado to California).

I washed the car, clay barred the various marks and such in the paint, washed it again, and then waxed the car. It looks mucho better now, if I do say so for myself. Here are some pictures of the beauty after her bath. 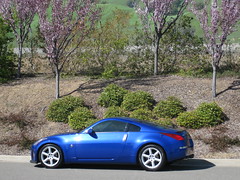 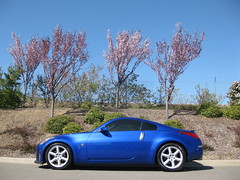 The rest of the afternoon I hung out and had a BBQ with friends, and new friends. I had a great time, but had to head back down here to San Mateo so I can work tomorrow. I made the drive in 1hr and 10 minutes. If only traffic were that nice all the time I might consider buying a house in my old stomping grounds and commuting to work. But I can only imagine that most days that would be a 2+ hr drive during commute times. Some day, perhaps later this week, I’ll get around to blogging about the Project350z’s first autocross which happened a few weeks ago.