So for my 2003 350z I had a custom trailer hitch built by a friend in St. Louis. It was hefty, mounting with ubolts through the bottom of the bumper and then a bar running forward to the differential. It weighed quite a bit, but was somewhat easy to remove at autocross events if I was concerned about the weight.

I just spent the last hour and a half trying to dig up an old photo of the hitch, but have so far been unable to do so! I’m hoping to get some photos from the company who made the hitch (no longer produced or sold, but we’ll see if they still have them). I did finally locate a photo of when the hitch was being built! Though it really isn’t useful for much, here it is. This is the mount at the rear diff. 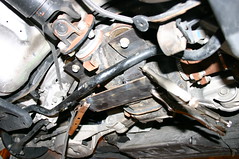 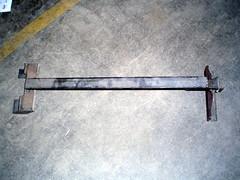 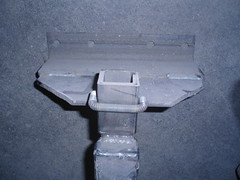 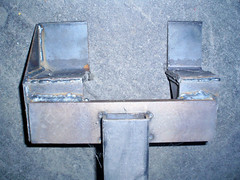 Then of course there is the car actually towing at trailer. This photo was taken in the parking lot at the Jack Daniel’s Distillery in Lynchburg Tennessee in April 2005, just a few days after the hitch was constructed. I always loved this photo 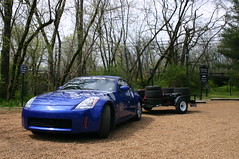 So why the hitch post now? Well, it’s that time. Time to get a hitch for the 350z, why? Because autocross season is coming up and I need a way to get wheels and tires to the events! So I ordered a Curt hitch for the 350z today. It’s about as different as can be from the hitch that was on my old car.

It mounts only to the bumper, and requires trimming the rear bumper cover a bit. I’m not too big a fan of that, but it appears to be the only real option for hitches at this point. I am going to see if I need to reinforce anything when I get the hitch on and a trailer.

Previously, as you can see in the photo I had a rather large trailer, a 6x8. I purchased the 6x8 so that I could haul a couple of sets of tires (I think the most I ever carried was 3, plus a motorcycle. I am pretty sure I don’t have any pictures of the motorcycle on the trailer behind the Camaro (which was what I had at the time).

I don’t know exactly what I will do for a trailer this time around, I will likely get something a little bigger than standard harbor freight tire trailer (I would like to be able to carry two sets of tires), though I won’t buy brand new like I did last time. I will probably peruse craigslist when the time comes, I just found a 4x6 enclosed utility trailer on there for $200 this evening that would be something that could work (when the time comes).

I’ll do a video/blog post of the hitch install this weekend if I can get to it. I’m hoping to hit the NorCalUFO autocross in Marina on Sunday.